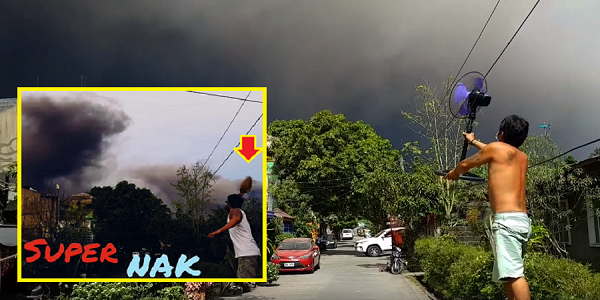 Filipinos are known to be happy-go-lucky people who can literally laugh in the face of danger. We’ve seen a lot of photos and videos of people waving at the camera and smiling at news crews even though their homes are being carried away by the floods or that they are standing on the roofs of their houses, waiting for rescuers to arrive.

There had also been a lot of photos of ‘life goes on’ moments, such as the group of friends who continued their drinking session amid the floods outside their home or the lechon being delivered for Christmas at a flooded neighborhood.

And as the beautiful Mayon Volcano spews ash and lava in its recent eruption, there were also a number of Filipinos who continued to find humor in their situation.

Take for example the self-appointed ‘superhero’ of Bicol named Super Nak who tried his very best to blow away the ash from Mayon Volcano to save his people. LOL.

Gary Bañaga shared the first video as Super Nak, taking a traditional pamaypay (fan) to drive away the dark ash from Mayon so it won’t reach their village.

But the pamaypay didn’t work that well for this superhero.

So, a few days later, he had to turn to the magic powers of his ‘manual’ electric fan to blow the ash away. The sky was so dark even though it wasn’t nighttime yet but as he swayed on the low wall he was standing on, it seems that his powers still were not enough to keep the ash away. Awwww.

While some netizens couldn’t find the humor in his video, commenting that he had really achieved nothing but make a fool of himself, many were actually amused that ‘Super Nak’ still had the ‘power’ in him to laugh at his dire situation.

What do you think of his, errrr, powers?