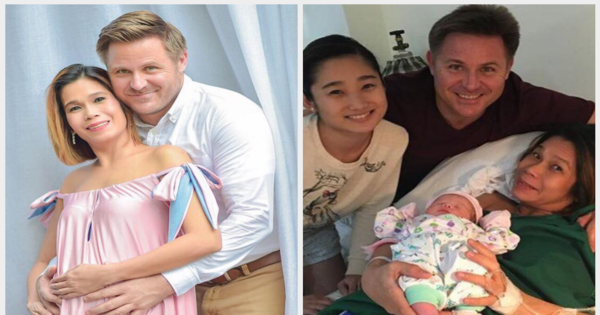 Comedienne and Kapamilya star Pokwang had given birth to her second daughter early morning of  January 18.  Her longtime American boyfriend Lee O’Brian welcomed their new baby and proudly shared their first ever family photo on social media.

In his Instagram post, Lee announced that Pokwang safely delivered their baby whom they named Malia. Lee wrote:

“This morning at 8:28 am Manila time, the most beautiful little angel came into our world, our Baby Malia!”

“Mamang @itspokwang27 is recovering well and @maesubong is fired up to get the Older Sister duties going on….”

“We love you, Malia!! We put up a special exclusive video on our @youtube channel at @pokleecooking, click the link in the bio!! #MayroonBabyObrian #Pokwang #LeeOBrian”

The couple also uploaded a vlog on their YouTube channel named “PokLee Cooking Channel” where photos of baby Malia were shown.

Pokwang whose real name is Marietta Sumbong is in a romantic relationship with Lee since January 20, 2015.  Lee is Pokwang’s leading man in their TFC’s (The Filipino Channel) movie “Edsa Woolworth” in 2014.  In a previous interview, Pokwang said she hopes Lee is “the one” for her.

At the start of their relationship, Pokwang admitted confronting Lee to make sure of his feelings and that not only she is in-love with him.  Pokwang shared that Lee kissed her and said he likes her and feels happy whenever they’re together.  That marked the beginning of their happy story together.

Being a solo parent, she also admitted having a hard time telling her firstborn, Ria Mae about their relationship.  However, Ria completely understood her and expressed that she was just only waiting for her mother to open up about her relationship with Lee.