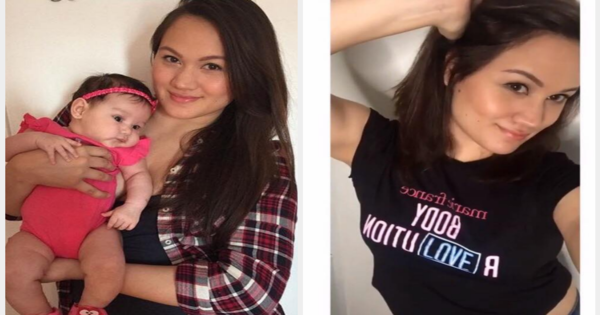 Melissa Ricks previously claimed not being ready yet for her showbiz comeback because of gaining weight. But more than that, she emphasized that losing self-confidence was the reason why, so she needed to work on it to improve her self-esteem.

Melissa had given birth in January 2015.  Since then, she claimed to have gotten bigger.  She added that she experienced Postpartum, too.

In an Instagram post, Melissa admitted that gaining weight had deliberately affected her self-esteem.  She shared she had battled with the thought that she became ‘less’ because of gaining more which made her lost self-confidence.  She wrote:

“I was made to believe that there was something wrong with that, that it made me less of an actress, less of a role model, even less of a person.”

“I was told to lose weight or nothing was there for me.”

“I kept trying and trying, going on all kinds of diets, workouts, everything you can think of.”

“There were days I would drown myself in tears because I felt so disappointed in myself, nothing worked.”

But during the Philips MOM app last year, Melissa happily shared that she started to lose 10 pounds in October and had become 35 pounds lighter by November.  What did she do?

According to Melissa, she first worked on motivating herself to feel better, stronger and healthier.  After which, she claimed to have felt more confident as she started to lose some pounds gradually.

Melissa’s height is 5 feet and 5 inches tall and previously weighs 190 pounds.  She narrated that she used to do exercise for 4 hours each day hoping for results which she failed to achieve.  Later on, she learned from the fitness experts that what she did only cause physical stress on her body where a recovery period is advisable after an intense workout.

Meanwhile, Melissa shared that she had lessened the time of doing exercise and stopped obsessing about timelines to achieve her desired weight. She said she’s taking it slowly for her metabolism to build up. The process is slow but she claimed she’s getting visible results.

Melissa is also on a Ketogenic diet where she eats food high in fat, low in carbohydrates and has adequate protein.