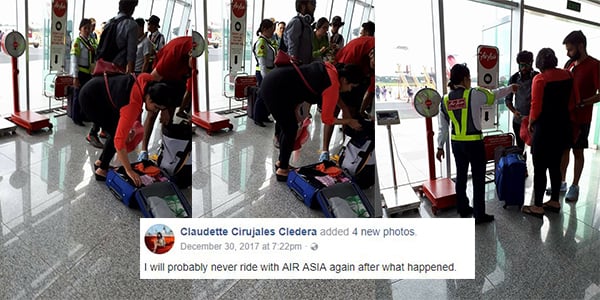 Have you experienced the same treatment from airline companies?

Last Saturday, December 30th, a young woman posted on Facebook over her experience with Air Asia and the alleged “scheme” its employees run on domestic and foreign travelers.

Claudette Cirujales Cledera was on her way home from a wedding in Puerto Princesa, along with some relatives. Their scheduled flight was at 9:25 AM for departure to Manila.

Cledera said that their “check-in went by without a hitch” and that they “were no longer required to weigh their carry-on luggage”. However, Cledera was suspicious at the fact that she caught the guard “eyeing” their stuff at the boarding gate.

As the gate opened and people started boarding the plane, the guard suddenly grabbed Cledera’s suitcase out of her hands.

“The guard didn’t say a word and rudely took my carry-on suitcase from me (as in hinatak nang walang paalam) and weighed is and said “Excess na to“.

Cledera was shocked to hear that her suitcase had gone over the 7 kg carry-on limit, “I was shocked…I weighed it before leaving for Puerto Princesa and it was less than 7 kg…She also took my handbag and added it to the weighing scale, eventually making my carry-on stuff go over 10 kg!”

Cledera also noticed that “all passengers at the priority lane and premium passengers went through without a hitch. No weighing AT ALL.”

She says, however, that “when the lady guard saw [my cousin] Kuya Bob enter [back to the gate to help us] and open his wallet, the tone of voice of the guard changed and said that 1500 [pesos] is what needs to be paid to have our stuff checked in.”

She is calling upon the management in Air Asia to investigate this manner and “how foreigners were randomly blocked at the boarding gate” as well.

Cledera’s parents eventually confronted upper management over the whole incident and that “they reprimanded the staff for taking advantage”. Cledera’s bag was then re-weighed to be just under 4 kgs.

“Air Asia management please please investigate this. It’s so disappointing that my first (AND PROBABLY LAST) trip with the airline was a disaster.”

Read the full story below.

I will probably never ride with AIR ASIA again after what happened.I don't usually do this pero I can't go on na mas…