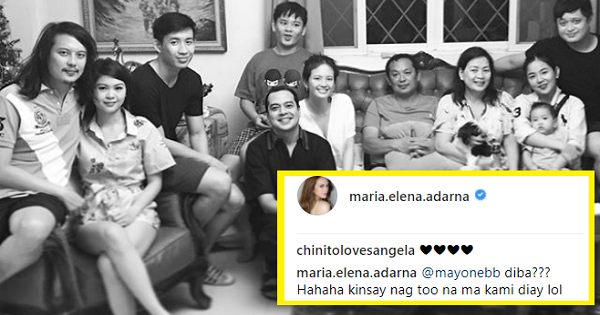 When photos of John Lloyd Cruz joining the family of Ellen Adarna as they celebrated New Year’s Eve in Cebu went viral, a lot of fans could not help but believe this is confirmation enough that the two are in a relationship.

But the photos had only been circulated by fans and did not come from Ellen or John Lloyd; thus, the speculations remained.

Some netizens were also trying to spot the rumored ‘baby bump’ but because John Lloyd chose to sit in front of Ellen, he so cleverly (was that intentional?) hid her tummy from prying fans’ eyes. Ellen was also wearing a loose white top, making it harder to determine if there was even any bump there at all.

After days of the photo making rounds on social media, Ellen finally posts the same on her Instagram page. This time, she posted the picture in black and white, captioning it with a simple word “Fambam ❤️”

Many fans and followers expressed their happiness in seeing the couple happy together with Ellen’s family. But a number of her fans actually had the courage to ask whether they were in a relationship and if she was pregnant.

While Ellen appears to ignore the pregnancy speculations, she replied to a comment from a certain user @mayonebb who wrote “So happy for you, @ maria.elena.adarna!!!”

In reply, Ellen wrote in Cebuano, “Diba??? Hahaha kinsay nag too na ma kami diay lol” (Right??? Who would have thought that we would end up together? LOL.)