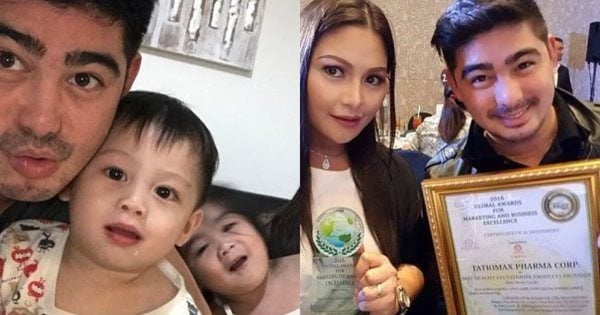 Do you still remember Danilo Barrios from the famous all-boy dance group, “Streetboys” who became a matinee idol during the ’90s? He is now a family man and a businessman rolled into one.

According to The Good Feed, Danilo is now enjoying his life living like a ‘king’.

Apparently, in 2013, Danilo married Regina Soqueño, a rich entrepreneur and the owner of Tatiomax Flawless Beauty & Skin Pharmaceutical. He then became the president of their business and the one who manages it.

Their business is a hit online with celebrity endorsers, Diana Menezes and Maria Sofia Love.

Aside from being a busy businessman, Danilo is also focused on being a family man. He is a father of two children named Hugo and Ysa. Danilo shared their children were very close to each other.

Danilo and his wife work hand-in-hand to nurture their business.  But amidst their busy schedule, they still made sure they get to spend quality time together. And owing to the fact that their business has something to do with health and beauty, the couple spends regular time together working out as their favorite bonding moment.

Danilo’s first appearance on TV was when he won “He’s so Kaka” title in a contest at “Eat Bulaga!”  He later on became a member of “Streetboys” and ventured into acting where he starred in numerous TV shows and movies.  His biggest showbiz break was when he became a cast of the youth-oriented show “G-Mik” in 1999.

He also starred in the movies “Magnifico”, “Dekada ’70,” and “Lastikman”. His last movie project was with ABS-CBN back in 2009, “Tiagong Akyat” with Gerald Anderson and Erich Gonzales on lead roles.