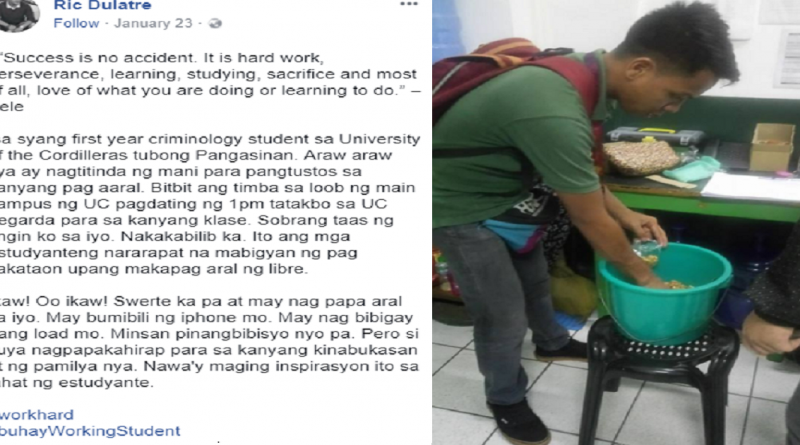 It is a sad reality in life that not everyone has money to send their kids to school, even in public schools where there are supposedly ‘no’ tuition fees. Thankfully, a number of students still managed to finish their studies by becoming working students, working at various jobs or selling different things just to pay their tuition fees or have ample allowances for school.

One such hardworking young student has earned much admiration from people on social media after his photo was posted on Facebook by someone who was impressed by his determination.

Ric Dulatre shared on Facebook a photo of the unnamed student who sells peanuts every morning and during his vacant period at the University of the Cordilleras, Main Campus, in Baguio City in the Philippines.

The young man hails from Pangasinan and is taking up Criminology at the said university. According to Dulatre, this young man brings along a pail filled with peanuts as he sells on a daily basis. He goes to the main campus in the morning, then hurries to UC Legarda at 1PM to catch his classes.

According to Dulatre, this determined young man is among those who deserve to receive free education for his diligence. He also hopes that the student will be an inspiration for other students who are just wasting their parents’ money.

Many netizens wished him luck and hoped that he would succeed in life, saying that hardworking and determined students like him are likely to be the ones to achieve their goals and become successful.