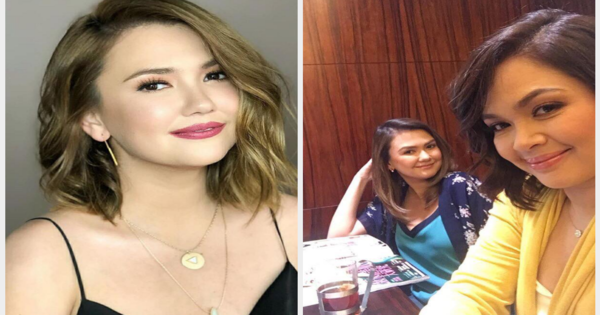 Angelica Panganiban recently worked with Judy Ann Santos in the movie “Ang Dalawang Mrs. Reyes”.  She shared it was a dream come true for her to be working with Judy Ann as she previously expressed admiration towards the versatile actress.

Angelica, a self-confessed fan of Judy Ann expressed being thankful to her for accepting the role in the movie.  The two played as devoted wives of their husbands who were having a secret gay relationship.

The two actress became close while doing the movie. Angelica shared that there were times when they would stay in one place sharing stories, ‘chilling’ and joking around. She claimed they were able to build a friendship that she wished for the tapings days not to end because she was always looking forward to being bonding with Judy Ann the next shooting day.

“Ang Dalawang Mrs. Reyes” is a comedy film under the direction of Jun Robles Lana and produced by Star Cinema, Quantum Films, and IdeaFirst Company.  The movie is Star Cinema’s first release for 2018.

The movie is a reunion for Angelica and Judy Ann who last worked together in 2001 for soap opera “Sa Puso Ko Iingatan Ka”.  It is also the reunion of the original “Mara Clara” stars, Judy Ann Santos and Gladys Reyes.

The movie opens in cinemas nationwide on January 17, 2018.