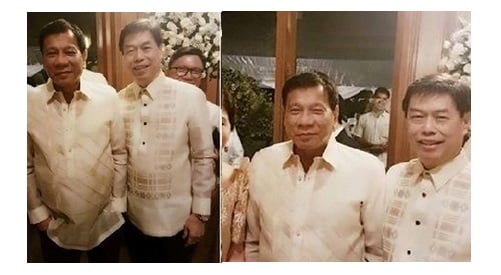 MANILA, Philippines – PNP chief Ronaldo “Bato” dela Rosa defended President Rodrigo Duterte over the latter’s photos with suspected drug lord Peter Lim; saying he did not know who he was at the time the picture of them together was taken.

[The President is not protecting Peter Lim. It just so happened that they were both principal sponsors at a wedding. But when the President found out that his kumpare was a confirmed drug lord, he was very angry.]

Dela Rosa said their probe on Lim coupled with Kerwin Espinosa’s identification of him confirmed that he really was the drug lord they had long been after.

[We let the public believe that he wasn’t a drug lord but we have enough information coming from – aside from Kerwin, from his driver and hitman, and also his gay brother.]

Dela Rosa added that Duterte has since ordered cases to be built up against Lim.

“Trabahua. Kung musukol, patya [Work on a case against him. If he fights back, kill him],” he said.

Dela Rosa’s defense of Duterte came after Sen. Antonio Trillanes IV showed pictures of Duterte and Lim together and said the president should be prosecuted along with Sen. Leila de Lima since she also had a picture with confessed drug lord Kerwin Espinosa.