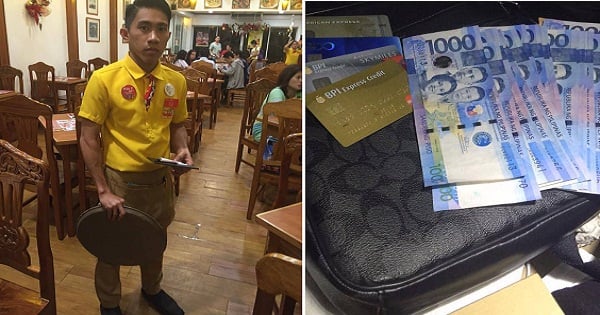 When Ken Hicban dined at Bacolod Chicken Inasal Jupiter Branch in Makati, Metro Manila, after attending an event, he accidentally left his bag at the restaurant as he was in a hurry to get back home for a party for a family member’s birthday.

It was in the middle of the trip home that he realized his bag was left at the restaurant. To his dismay, he realized the bag had all his credit cards, IDs, and his salary worth Php37k!

He hurriedly called the restaurant and went back in hopes of finding the bag – and was pleasantly surprised to learn than a food server was the one who found it and turned over the bag to the management for safekeeping until it was claimed by the rightful owner.

Hicban was able to get all his stuff intact!

He shared the story and a photo of the honest food server, Christian Jay Talamisan, as a way to thank him for his honesty. Hicban believes Talamisan deserves to go viral over his kind and honest actions.

It’s really great to hear such stories of honest people in this world filled with dishonest ones and robbers who blatantly kill others for a small amount of cash!