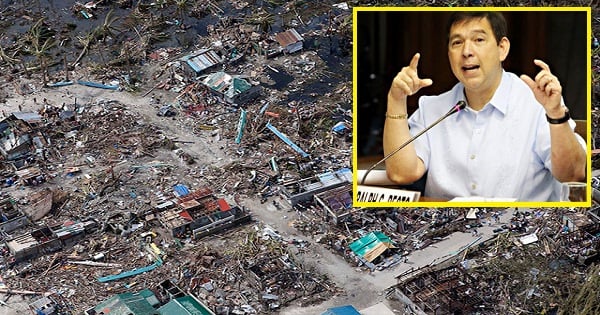 Senate Minority Leader Ralph Recto calls for an “itemization” of the P37.2 billion in the 2017 national budget allocated for calamity funds after finding no budget for Yolanda rehab set aside in the allocated National Disaster Risk Reduction and Management Fund (NDRRMF).

According to Recto, the fund “does not earmark any amount for Yolanda rehabilitation despite the huge backlog in deliverables.”

It has been 3 years since the devastating supertyphoon hit many areas in the Philippines but a lot still needs to be done to help the affected people rebuild their homes and their lives.

“There is still much work to be done in Eastern Visayas but the calamity fund is silent on the rehabilitation deficit, which must be funded,” the senator said. “If reconstruction is still a work in progress, then such must be reflected in the calamity fund to reassure Yolanda victims that what government had promised will be still be redeemed.”

He believes that by not specifically allocating money for Yolanda rehab, the government could be misinterpreted as ceasing funding for the much-needed repair of public properties destroyed by the supertyphoon.

He also believes that itemizing the projects for Yolanda rehab will ensure that work will be done and there will be transparency this time.

The senator added, “By listing these, work will be assigned and the public can easily monitor what responsibilities have been given to which agencies.”

While there was no specific budget for Yolanda rehab in the 2017 calamity fund, the 2016 budget has earmarked Php18.9 billion.

Before that, more funds were also allocated for the same item; however, Sen. Loren Legarda revealed that of the Php25.6 billion earmarked for shelter support for Yolanda victims, the Aquino administration had actually failed to release Php20.7 billion. She believes this was due to red tape in the previous administration but she hopes that the current one will continue with the rehab efforts.