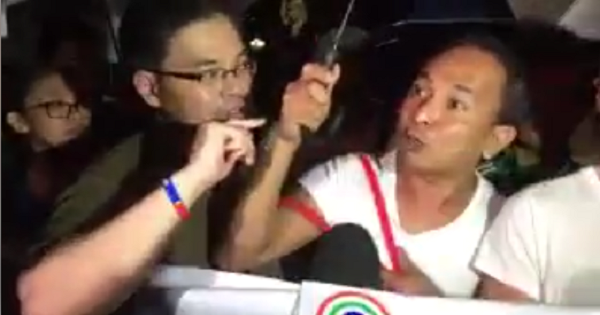 Heavy rains did not stop the two rallies held by protesters and the supporters of the late President Ferdinand Marcos but while there were only a few pro-Marcos supporters who attended (incidentally, they were the pro-Duterte youth), this did not stop them from ‘winning’ in the debate that followed.

In a post that has since garnered over 2.8 million views since it was posted last night, two people could be seen debating – and one of the debaters was later identified by fans as Raffy Gutierrez whom many mistook to be a lawyer after he delivered what they believe was an excellent speech to defend Marcos’ burial.

According to Gutierrez, sharing the sentiment that many pro-Marcos (and pro-Duterte) people believe, it is wrong for the anti-Marcos people to only focus on the late president’s bad side considering that the strongman had done so much for the country.

Moreover, while Marcos held the accountability over the atrocities of the Martial Law, there are still a number of people who were also directly or indirectly involved who are still alive to this day – and prime example of that is former Pres. Fidel Ramos. According to Gutierrez, it is wrong to simply forget about Ramos’ sins, too, just because he became president.

Gutierrez earned much praise on social media after finishing up this piece by saying that these anti-Marcos people should actually be anti against everything bad in the country, not just stop with being anti-Marcos especially because Marcos is already ****!

Click “Next Page” Below to Watch the heated debate that caught the attention of social media: