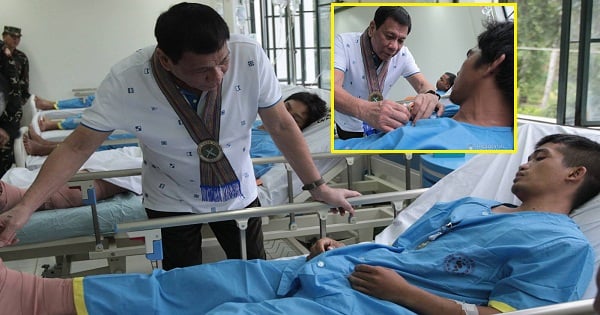 It had been a very long weekend as October 31 and November 1, 2016, were declared as holidays but instead of going home and spending all his time with his family in Davao City, southern Philippines to visit the **** just as everyone else is doing, Pres. Rodrigo Duterte opted to visit the living instead.

He went to Camp Teodulfo Bautista in Sulu to visit the soldiers who were wounded during the clash with the Abu Sayyaf.

For their bravery and heroism, the soldiers were not just awarded with Wounded Personnel Medals but were also given Glock pistol and Php 100,000.00 cash!

Pres. Duterte personally pinned the medals to the wounded soldiers’ chests and spoke with them for a while. Aside from the president, several prominent officials from the Armed Forces of the Philippines (AFP) also visited these wounded heroes in Sulu.