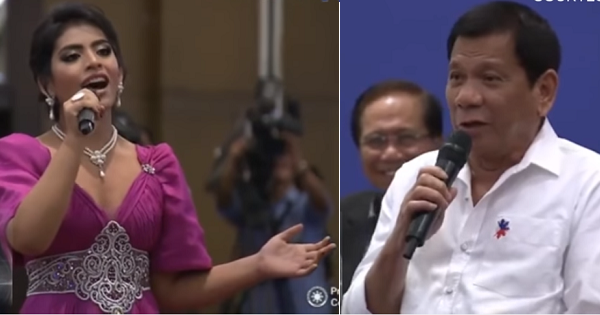 While visiting the Filipino community in Kuala Lumpur, Malaysia, President Rodrigo Duterte and his men were treated to a solo performance of “Ikaw” by Filipina singer Yasmin Asis. As soon as the singer began singing, the president could be seen truly enjoying the song and even singing along as he mouthed “Ikaw” when he recognized the song.

A quick-thinking member of the staff who noticed Duterte singing along quickly gave the president a microphone so that by the middle of the singer’s solo performance, the song turned into an impromptu duet.

It was clear that Duterte’s participation in the performance wasn’t planned but the singer gladly accommodated the president in the duet, even stopping at some lines to let the president sing by himself as the crowd cheered.

Though the president did not memorize the song and missed some words, it didn’t matter to those in attendance because they were glad to see him sing. Also, it was surely a treat for the Filipino community to be personally serenaded by the president!

At the end of the impromptu song number, the president invited the singer on stage where they chatted for a while before the crowd erupted in another round of applause for the lovely performance. What do you think of this number?