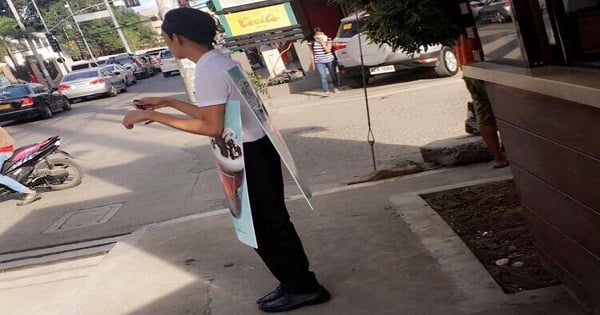 In a post that has gone viral on Facebook, Dexter Ryan Coro Suarez of Davao City, southern Philippines slammed a McDonald’s chain located in Davao City for supposedly ‘dehumanizing’ one of their staff by letting him become a “human billboard”.

The post was accompanied by a photo of a young guy wearing posters (sort of like sandwich boards but only using tarpaulin) of what appears to be dessert offerings from McDonald’s.

He wrote on his post, tagging the pages of McDonald’s Philippines and McDonald’s Davao Sta Ana:

I really hate it and it pains me when establishments make their employees do this. Humans are not MADE and BORN to be doing this. It is not only dehumanizing, but also embarrassing. I am not saying that this is not a noble job. What I’m trying to say is that, with the advent of technology, companies or establishments can make use of what’s available other than HUMANS. Products of technology can’t serve food, nor can they attend to customer needs. We have HUMANS for that. And for THIS type of PROMOTIONAL JOB, we have others – NOT HUMANS – made for this.

HUMANS ARE NOT PROMOTIONAL POSTERS.

The post was met with mixed reactions from netizens, with many taking the side of Suarez while others asked what he did after he saw the young man carrying the sign since he took to social media to post about it but could have gone to the manager to speak about the matter.

In response, he told these people that he did not go to the manager thinking that it would be futile but that he could have a better chance of being heard by using social media.

Others pointed out, however, that human billboards are not ‘dehumanizing’ people because these people have signed up for that job, anyway – plus, McDonald’s Davao Sta. Ana is not the only one doing this.

According to Wikipedia, human billboards have around for centuries as a form of advertising! This method of advertisement is believed to be one of the most effective in terms of grabbing the attention of prospective customers – so much that it was banned in some cities because they were a distraction to drivers, potentially causing traffic accidents.

Still, do you think the signs degrade the people carrying the advertising materials? Share your thoughts with us…