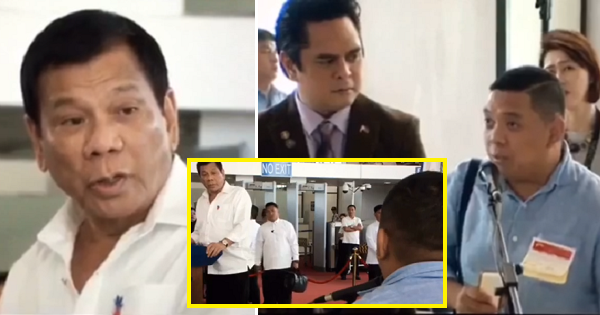 When Pres. Rodrigo Duterte made a side joke to Vice President Leni Robredo about her smooth knees when they both visited Leyte for the third anniversary of Typhoon Yolanda, women’s groups and the media got angry over the remark, calling the president as a foul-mouthed, sexist person. Even Robredo slammed the comment; though she did not directly tell him that but made the statement when asked by the media.

As expected, many of Duterte’s supporters readily backed him up on this one, explaining that jokes like that are ‘normal’ because the president was just trying to lighten up the moment but, understandably, women’s groups felt insulted by the remark.

In a totally unrelated press conference after the knee remark had gone viral, a reporter asked the president about his remark and whether he felt that it was appropriate for him to say that to a woman considering his position as president.

The reporter repeated the question several times and a visibly irked Duterte explained that he only did that to lighten the moment up as he was very angry at the time due to the many irregularities he discovered with the Yolanda funds – especially because only 4,000 people were reported to have received permanent housing yet there were billions of pesos allocated for housing.

As housing czar, it is now Robredo’s responsibility to ensure that the Yolanda victims will finally get their homes after three long years – and he even gave Robredo a deadline to finish the housing projects by December.

Still, the reporter insisted that he make a statement over the knee remark; thus, Duterte slammed the reporter and the rest of the media for focusing on trivial things like the small remark he made about Robredo’s knees but ignoring the bigger picture such as the questionable spending of the Yolanda funds.

He also told the press gathered for the event that they should not make a standard for him and that they should focus on the bigger, more important matters instead of trying to find fault over his actions and the words that he says even if he was just joking – and this earned applause from those in attendance.