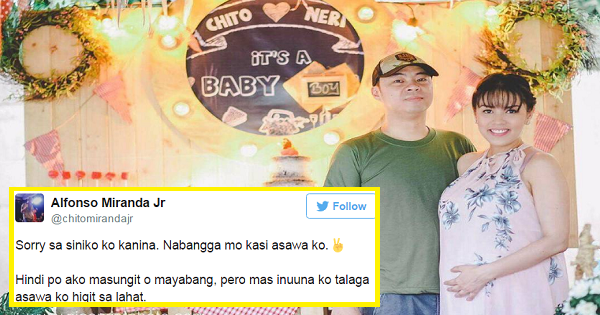 Many people feel that are entitled to have their pictures taken with their favorite stars because these people are public figures, after all, and are supposed to make sure their fans are happy. Well, that’s just so wrong!

Despite being public figures, stars are people who have the right to privacy, too – and having your picture taken with them is not your right but privilege! So, it is important to accord them respect or else you could be at the receiving end of their wrath!

This is what happened to a fan who tried to have his photo taken with Parokya ni Edgar frontman Chito Miranda. Several people mobbed their idol after seeing him at the mall.

While Chito would have gamely taken a photo with his fans, one was so enthused in getting a photo with his idol that he bumped into Chito’s very pregnant wife who actually has a sensitive pregnancy and had even suffered a miscarriage in the past.

So, in protecting his wife, Chito elbowed this particular fan; moreover, he refused to have his photo taken with the mob but he would later apologize on Twitter, telling fans that he was simply protecting and assisting his pregnant wife, he wasn’t being arrogant or snotty. He said that he puts his wife’s welfare above everything else – and considering that she’s pregnant, he really should!

What do you think of these inconsiderate fans?