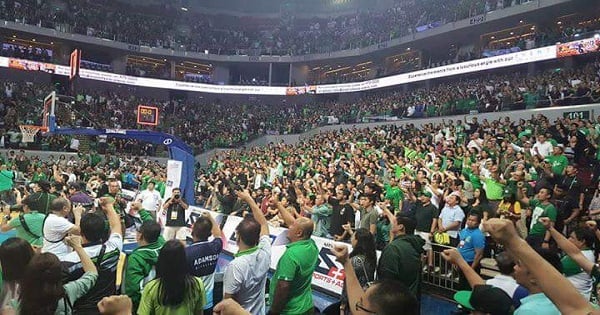 Days before the UAAP men’s basketball game on Oct. 2, 2016 between the Ateneo de Manila University and the De La Salle University, photos of memos coming from both schools had gone viral, urging players and spectators to wear black in solidarity with human rights victims and to protest the possible burial of former Pres. Ferdinand Marcos in the Libingan ng mga Bayani (LNMB) as well as the ‘growing number of extrajudicial killings/summary executions in the country.

Such silent protest action is clearly also a protest against the incumbent president, Rodrigo Duterte.

But while there were those who wore black, many wore their school colors – and the auditorium was filled with a sea of green (De La Salle) and white.

These people are showing solidarity behind the president despite the clear memo that they protest against him.