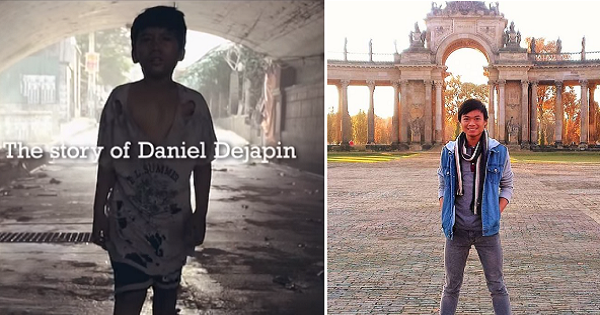 As young as 6 years old, Daniel Dejapin ran away from home in the slums of Manila because he felt that his parents did not care for them and he could not understand why there were so many people constantly going in and out of their house.

Living in the streets, Daniel saw what a difficult life he had gotten himself into yet he tried his best to earn an honest living and stay away from the kids sniffing solvent to forget about the cares of the world for a little while.

Instead, Daniel took to selling roses. Even while he was rejected many times by would-be customers and had to eat food he salvaged from trash, he did not let go of his dream of finishing school so he could have a better life.

His advisers told him that he could earn more money if he finishes high school. So, he strived hard to go to school. His teachers were helpful and understood his plight; though he did experience bullying.

A brilliant boy, he was eventually able to obtain a scholarship from Aguinaldo International School where he graduated from high school. But while getting a high school degree was something that would surely land him a job now, he knew he could have a better chance at a brighter future if he could go to college.

After months of searching for scholarships, he was able to obtain something that you’ll surely be amazed of: a United World College scholarship which gave him the chance to study in Robert Bosch College in Germany!

It truly is amazing that from a street kid with an almost zero chance of getting a good future, this young man is now in Germany studying to become a social worker so he could help people!

(I want people to know… that when street children are given the opportunity to develop their talents, to showcase their abilities, [they shine].)

(A child changes with every opportunity you give him, especially street children – they just really need confidence, faith. And they will be transformed. Like me. If it weren’t for the people around me, I would still be one of them, one of the kids selling flowers on the street.)

Good luck, Daniel Dejapin! You truly are a wonderful inspiration to everyone…