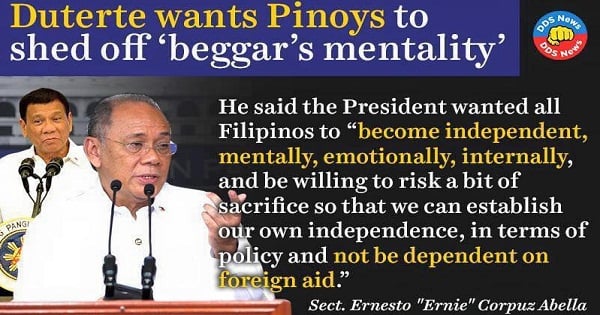 Amid criticism that Pres. Rodrigo Duterte is trying to offend the US and other big nations who are also the main donors when there are calamities in the Philippines, Presidential Spokesperson Ernesto “Ernie” Corpuz Abella said that the president was merely saying these things because he wants to country to shed off “beggar’s mentality”.

In light of the president’s strong words against the US and the European Union, even directly daring these nations from pulling aid they are giving to the Philippines, several of his detractors, including media personalities, expressed horror that Duterte is single-handedly destroying ties with these countries which are the ones we could turn to during disasters.

The president, however, wants people to stop that mentality and stop being afraid of offending these big countries as we are afraid of losing their aid.

In a press conference, Abella referred to the comments made by actress Agot Isidro, “Her position is the kind of mental attitude that the President wants to address, which is when he mentioned that we tend to have a mendicant or a beggar’s mentality.”

“[The president wants the Filipino people] to become independent, mentally, emotionally, internally, and be willing to risk a bit of sacrifice so that we can establish our own independence, in terms of policy and not be dependent on foreign aid,” said Abella.

The president’s rants should not be taken as a start of a word war with these donor nations but should be viewed as a “challenge to be more nationalistic and not depend on other countries”.

What do you think?