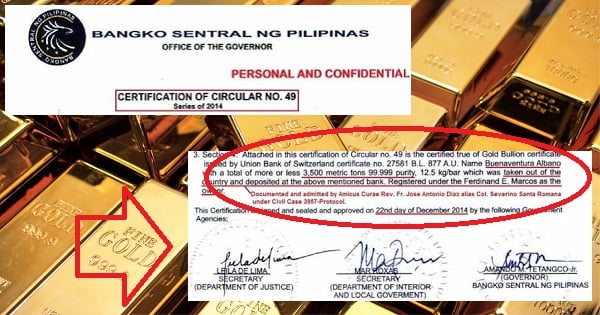 Update (01/08/2017): An article that appeared on Rappler refutes the reports about the supposed gold bars deposited by the Aquino administration in a Thailand bank back in 2014 [Click here for the link to the article]

There had been countless rumors in the Philippines about the Yamashita treasure which the Japanese supposedly buried in the country during the war as well as plenty of gold reserves stashed in foreign banks by former president and dictator Ferdinand Marcos but while many Filipinos believe that these stories were true, there have been no evidence that such treasures exist.

It is believed that Marcos was able to find a substantial stash of Yamashita gold – even former first lady Imelda Marcos claimed that it was from this treasure horde that they got rich! Of course, there were many skeptics that this gold horde even existed – for why would the Japanese bury their treasure in the Philippines when they do have a lot of land to stash it in their countries and that they knew they were about to lose in the war, anyway?

Well, there is a lot of mystery surrounding the Yamashita treasure and the Marcos gold but some supposedly ‘secret and confidential’ documents are circulating on the web, purportedly showing that back in 2014, the Philippines supposedly deposited 3,500 metric tons 99.999 purity of gold at the Bank of Thailand – and that signatories for this gold deposit included then Justice Secretary Leila de Lima, then Interior Secretary Mar Roxas, and then Senate President Franklin Drilon.

The document was supposedly dated December 22, 2014 – just in time for Christmas! A section of the document mentioned that the gold was certified to be authentic by the Union Bank of Switzerland and that it had been registered under Ferdinand E. Marcos.