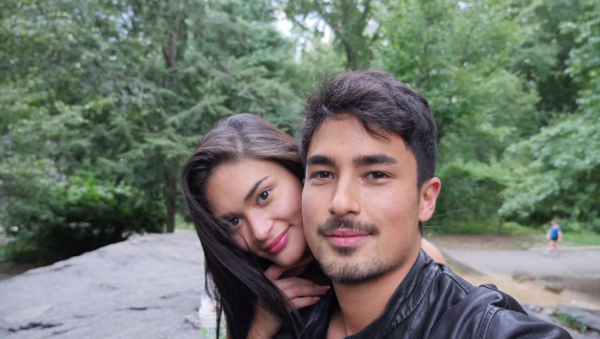 Some weeks ago, Pia Wurtzbach posted an Instagram photo with Filipino-Swiss race car driver Marlon Stockinger; this snapshot quickly sparked rumors that the two were dating but Stockinger quickly quelled the talks by publicly announcing that they are “just friends”.

When asked if they were dating, he said, “I normally don’t like talking about my private life but at the moment, again, we have known each other for a while. We’re friends and we just happened to see each other in New York. It was just a nice picture, nice moment with her.”

With the two living so far away from each other, the distance was actually a factor why they aren’t dating, Stockinger said.

Weeks after making that statement, however, Stockinger backtracks on his pronouncements and finally admitted that they were “seeing each other”.

“The truth? Let’s put it this way if Pia was here tonight she’d be my date here so yeah obviously we see each other but we just want to keep it down low pretty much but yeah, I’ve been seeing Pia,” he said. “It’s amazing! Pia is very beautiful of course, that is the reason why she is Miss Universe. I just feel lucky that we got to meet and we’ve been seeing each other.”

As for the distance factor he had been talking about? His answer to that was, “Well it’s difficult obviously she’s across the Atlantic right now, I’m here in the Philippines. I’m also in Europe so whenever we get the chance, we make the most out of it.”