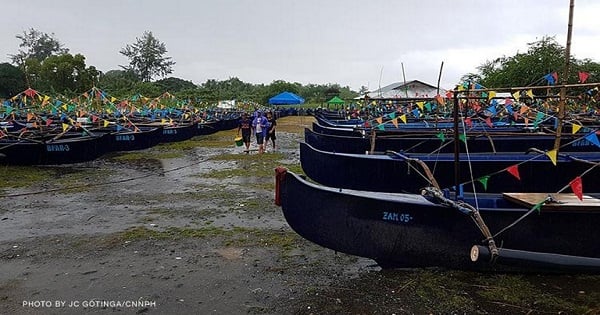 Change has come even to the poor fisherfolks of Masinloc, Zambales in Central Luzon because 100 motorized boats have been released by the Department of Agriculture (DA) for them – and at no cost to them at all!

Each of the motorize boats costs Php80,000 ($1700) but the DA is giving all these boats to the poor fishermen for free – because if the DA sold these to these fisherfolks, they couldn’t afford it and the boats would probably be left in some warehouse just like many farm equipment that Agriculture Secretary Manny Piñol discovered and subsequently released for farmers some weeks ago.

But the good news does not stop with the 100 motorized boats because the DA actually plans to distribute a total of 1,000 in Zambales alone! Moreover, since two fishermen will share one boat, then these boats will be able to help at least 200 families in the province.

This good news was met with joy and pride by the fishermen who felt happy that with the bigger boat made of fiberglass and having an engine, they will now be able to reach farther out to sea to get more catch.

The fisherfolks lamented that the catch had been great when they were able to go fishing at the Scarborough Shoal but now that China had claimed the area and had prohibited fishing by Filipino fishermen, they are forced to find someplace else to catch fish. Often, they have to cope with catching fish near the shore where the haul is smaller.

With the bigger boats, they will now be able to go out to sea again – and get more fish even if they could no longer fish at the Scarborough Shoal.