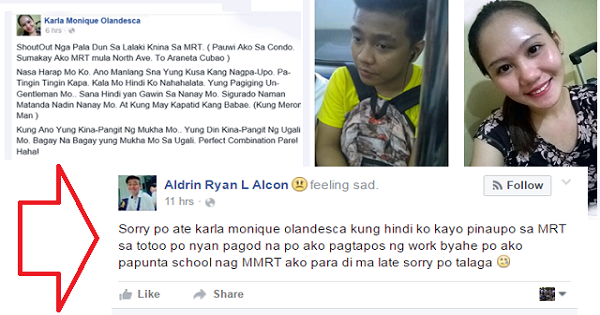 For not offering the girl in front of him his seat, a guy named Aldrin Ryan L. Alcon was shamed on social media by that same girl who not only berated how he had been so “un-gentleman” when he didn’t stand up to give her the seat despite seeing her standing right in front of him, she also mocked his “ugly face” which was the “perfect combination” to his “ugly behavior.

But while the girl, a certain Karla Monique Olandesca, had wanted to shame Alcon for his un-chivalrous act, her post actually backfired and it was her who earned a ******* on social media.

Many people told her that she shouldn’t have posted the guy’s picture on social media or rant over how he did not let her sit down, especially because priority seating is only required for PWDs (persons with disability), pregnant women, women with small children, and elderly people – and she’s from none of the above categories.

Moreover, people believed that what she did constitutes to cyberbullying and that Alcon could file charges against her – and win it in court!